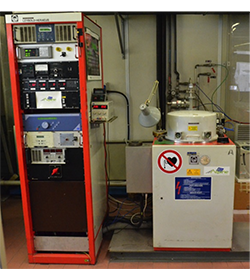 Radio frequency (RF) sputtering is a technique used for the deposition of thin films, starting from dielectric or insulating material. Like direct current (DC) sputtering, RF sputtering involves running an energetic wave through an inert gas to create positive ions. The target material, which will ultimately become the thin film coating, is struck by these ions and broken up into a fine spray that covers the substrate, the inner base of the thin film. RF sputtering differs from DC sputtering in the voltage, system pressure, sputter deposition pattern, and ideal type of target material. During an RF sputtering process, the target material, substrate, and RF electrodes begin in a vacuum chamber. Next, the inert gas, which is usually argon, neon, or krypton depending on the size of the target material’s molecules, is directed into the chamber. The RF power source is then turned on, sending radio waves through the plasma to ionize the gas atoms. Once the ions begin to contact the target material, it is broken into small pieces that travel to the substrate and begin to form a coating. Since RF sputtering uses radio waves instead of a direct electron current, it has different requirements and effects on the sputtering system. For instance, DC systems require between 2 and 5 KV, while RF systems require upwards of 10 KV to achieve the same rate of sputter deposition. This is largely because DC systems involve the direct bombardment of the gas plasma atoms by electrons, while RF systems use energy to remove the electrons from the gas atoms’ outer electron shells. The creation of the radio waves requires more power input to achieve the same effect as an electron current. While a common side effect of DC sputtering involves a charge build-up on the target material from the large number of ions in the chamber, overheating is the most common issue with RF systems. As a result of the different powering method, the inert gas plasma in an RF system can be maintained at a much lower pressure of less than 15 mTorr, compared to the 100 mTorr necessary for optimizing DC sputtering. This allows for fewer collisions between the target material particles and the gas ions, creating a more direct pathway for the particles to travel to the substrate material. The combination of this decreased pressure, along with the method of using radio waves instead of a direct current for the power source, makes RF sputtering ideal for target materials that have insulating qualities. 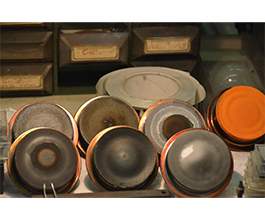 Example of insulating targets (3 inch dia.) used in Rf magnetron sputtering; note the eroded region in the shape of a circular ring typical this technique. « Torna a Macchine